Negeri Sembilan – Making a comeback in 2022

Negeri Sembilan’s property market registered a slight drop of 2.9 per cent in the volume of transactions in the first nine months of 2021 compared to the same period in 2020. The value of transactions however rose by 19.4 per cent, bringing in a total of RM4 billion from RM3.4 billion in the corresponding period...

Certain sub-sectors like the residential and industrial sub-sectors performed better in 2021 than the previous year. The residential market registered a 4.7 per cent increase in the volume of transactions and an even higher growth of 18.3 per cent in the value of transactions in the first nine months of 2021 compared to the corresponding period the year before. Some of the increase can be attributed to the more affordable houses being made available to the market and the attractive incentives offered via the Home Ownership Campaign (HOC) 2020-2021 while others could be due to the higher-priced properties which raised the value of transactions higher.

The improvement recorded by the industrial sub-sector in the state was even more impressive as the volume of industrial property transactions went up by 6.05 per cent in the first nine months of 2021 whilst the value of the transactions shot up by 48.83 per cent. One possible reason for the good performance of the industrial sector could be the weakened Malaysian Ringgit which made Malaysian goods and services cheaper, thus boosting exports of the country’s manufactured products. This in turn has provided a boost to the industrial property sector.

Based on the performance of the two sub-sectors and the prevailing economic environment, the market is expected to continue the positive momentum moving towards the end of 2021. But following the harrowing two years brought upon by the Covid-19 pandemic, the consensus however believes that Negeri Sembilan’s property sector will improve in 2022 and perform slightly better than 2020 and 2021 although still below the pre-Covid years of 2017 to 2019.

The state’s property scene is however expected to experience more robust activities, especially in the Seremban-KLIA corridor and Nilai where prominent projects such as Malaysia Vision Valley 2.0 (MVV 2.0), Bandar Sri Sendayan, Bandar Ainsdale, S2 Heights, Putra Nilai, and Nilai Utama are already present. Property prices in this corridor will generally be stable but those sited in good locations, are likely to experience positive appreciation in the coming years.

The long-talked-about MVV 2.0 remains a mega project in the state that has the makings of a successful economic and urbanisation programme. Under the plan, it will introduce new economic drivers, promote economic growth, and has been planned as a game-changer to unlock the value of Negeri Sembilan. •MVV 2.0 is a megaproject that will introduce new economic drivers as enablers for traditional sectors, promote economic growth, and harness the concept of value creation to become a nation of producers (instead of as consumers) that is envisioned as a game-changer to unlock the value of Negeri Sembilan.

•The 42-lots first phase of Hamilton Industrial Park (part of MVV 2.0) was fully sold within months of launch, setting the tone for the market given its suitable price points of RM50 to RM55 per sq ft with land area ranging from about 1.3 to 9.1 acres located to the south of Nilai Industrial Estate.

•The commercial sub-sector will likely perform better in 2022, barring any lockdowns or major catastrophes.

•The industrial market in Negeri Sembilan is expected to do better in 2022 than in 2021.

The volume of residential transactions in Negeri Sembilan has seen a slight increase of about 4.6 per cent from the first nine months of 2020 to the same period in 2021. There was also an increase in the value of transactions but by a larger margin at 18 per cent for the same period. The majority of the transactions were in the range of RM100,001 to RM200,000 and RM200,001 to RM300,000 with the two to three-storeys terrace houses being the most popular followed by the single-storey terrace houses. Areas that showed the most activity were Seremban and Port Dickson.

Developers in the state were more focused on clearing existing stocks of houses that they have launched instead of launching new projects. Most of the residential projects launched by developers over the past 3 to 5 years have been mainly double-storey terrace houses priced in the RM400,000 to RM600,000 bracket. With the conclusion of the HOC and with no extension announced by the government, residential property sales may slow down especially as the market will adjust to the new normal of no HOC incentives in the early part of 2022. This may lead to an increase in the number of unsold houses but it is noted that Negri Sembilan has never been high up on the list of states with housing overhang.

In any case, the better performance seen in Negeri Sembilan’s housing market in 2021 may be a temporal high for the state due to the helping hand from HOC. With the campaign over at the end of 2021 and no announcement of an extension into 2022, Negeri Sembilan’s residential market in 2022 is expected to perform not as brightly as it would’ve done in 2021. 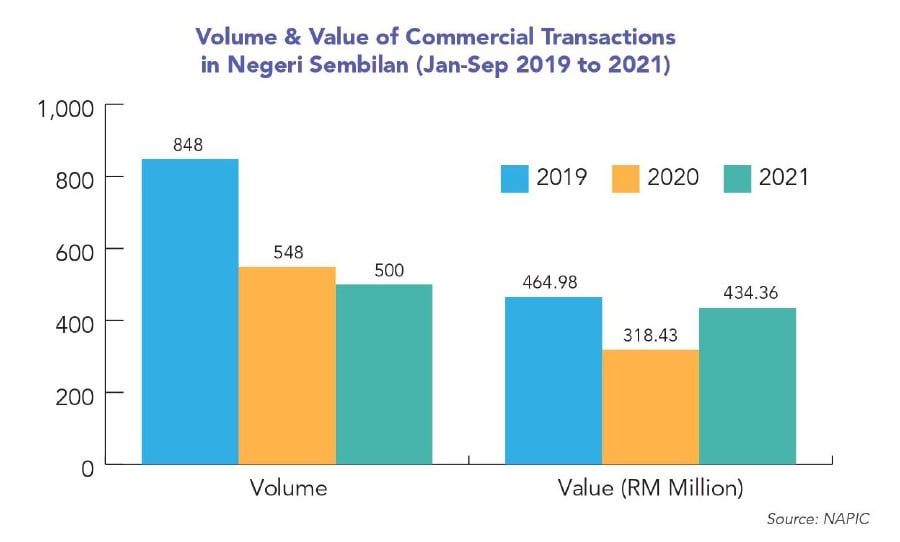 There were fewer commercial transactions that took place in Negeri Sembilan in the first nine months of 2021 as compared to the same time in 2020 which saw a reduction of about 8.8 per cent in transactional activities. However, there was a noticeable increase in the value of commercial transactions which was 36.5 per cent higher compared to the same period in 2020. Two to 2.5 and three to 3.5-storeys shops were among the popular types being transacted and most of them were in Seremban and Port Dickson, and this was the same for the value of the transactions as well.

With almost all economic sectors having been gradually opened since July 2021 after the National Recovery Plan (NRP) was initiated on 15 June 2021, commercial activities in Negeri Sembilan also saw a return to the market albeit at a slow rate. This perhaps is to be expected given its relatively smaller market size and population compared to neighbour Klang Valley which oftentimes also attracted folks in Negeri Sembilan to commute over for work daily in the pre-Covid-19 days. It is likely that after the interstate travel ban was lifted in October 2021, commuters have reinstated their daily commute to Kuala Lumpur and elsewhere in Selangor for their professional duties.

Like the residential sub-sector, property developers in the commercial market will continue to concentrate on clearing existing stocks except for certain locations like Seremban 2 and Sendayan, where developers will be launching previously held back projects in the next 12 months barring any disruptions from Covid-19.

Negeri Sembilan’s capital of Seremban has by and large been the commercial heartbeat of the state and since the 1980s, several blocks of purpose-built offices (PBOs) have been erected in the city. Rental rates at these premises are currently about RM1.50 to RM2.20 per sq ft per month depending on factors such as age, condition, and services provided by these buildings. With the tougher economic situation in the market brought on by Covid-19 that has yet to be fully overcome in 2021 and foreseeable also to continue into 2022, this may motivate businesses to rent the more affordable shop lots and shop-offices over the PBOs in time to come.

Generally, the population’s real income has dropped and this has resulted in lower buying power. In addition, as people are already used to buying things online given the lockdown, it will take some time for the trend can be reversed, if it ever happens.

Between retail and hospitality, retail is expected to experience a resuscitation of business first in Negeri Sembilan although they are both incredibly affected by the Covid-19 pandemic. But to put things in perspective, hospitality is now considered a luxury item due to the shrunken and continuing shrinking take-home pay including the mounting inflationary pressures moving into 2022. As such, any income generated by an individual or household is likely to be channelled into the more pressing items like food, utilities, and some money to set aside for the rainy day.

For investors at large, the retail sub-sector in Negeri Sembilan presents a better bet as compared to the hospitality sub-sector given its more flexible nature to meet and adapt to short-term changes. Units used as retail lots can be subdivided, reduced, or enlarged physically within a shorter time whilst it is much more convenient to substitute vacant lots with any kind of business compared to the hospitality sub-sector.

As to how the market will perform in 2022, Negeri Sembilan’s commercial sub-sector is likely to do better in the new year than it has done so in 2021. This however also hinges on any possibility of a mass lockdown which if imposed will surely impede progress in the commercial property market.

Industrial properties in Negeri Sembilan have not witnessed any major changes like those happening in the Klang Valley, including adoption for a more fanciful purpose other than manufacturing, storage, or distribution, except for one project which caught the attention of market players in the state – the successful sale of the first phase of the Hamilton Industrial Park, part of MVV 2.0 located to the south of the Nilai Industrial Estate. All 42 lots were sold within months at a price of around RM50 to RM55 per sq ft, each with a land area ranging from 1.3 to 9.1 acres. This successful model reinforces the point that rightly priced vacant industrial land in strategic locations can still attract buyers regardless of the time and season, not precluding the aftermath of the Covid-19 pandemic.

Taking cognizance of this flattering industrial result supported too with the return of the state’s economy, NAPIC’s statistics, and the ongoing projects chiefly the MVV 2.0, one can expect the industrial sub-sector in Negeri Sembilan to perform better in 2022 than it has in 2021. – Story courtesy of Henry Butcher Malaysia.