Lim said the value of I-Berhad’s investment properties would be enhanced by being located within the golden triangle.

There would also be spillover effects to the company’s hospitality, retail and leisure businesses, he told NST Property.

Lim said it is quite possible that I-Berhad could achieve its targeted RM1 billion investment for property portfolio in less then five years from now.

According to its 2018 annual report, as at end-December last year, I-Berhad’s property investment portfolio stood at RM641.1 million.

I-Berhad plans to upgrade and relocate some of its theme park rides and attractions at i-City, in order to free up the land for property development which will include investment properties.

“There’s a lot happening in i-City,” said Lim, adding that for the rest of this year the company would be launching RM800 million worth of properties.

Next year will see the opening of the second convention centre and the DoubleTree by Hilton hotel at Central Walk @ i-city.

MOST ICONIC SHOWPIECE IN I-CITY

Lim said the most iconic element of the entire urban enclave would be the landmark and skyline-changing 68-storey office-cum-five-star hotel tower.

The tower is envisaged to be the tallest building in Shah Alam and possibly Selangor.

Rising an imposing 300 metres from ground to rooftop, the grand tower will see Grade A offices occupying Level 1 to 50, separated by a sky lobby and a sky pool before continuing on with a five-star hotel from Level 51 to 68.

The highest floor would be topped off by a breath-taking sky bar which would illuminate the skyline by night, Lim said.

“The tower will be surrounded by a medical mall, commercial-based developments and residential properties catering to the international community.”

He said the medical mall would feature three components — a medical office, a medical centre and a wellness centre providing healthcare-related services to residents, visitors and medical tourists. 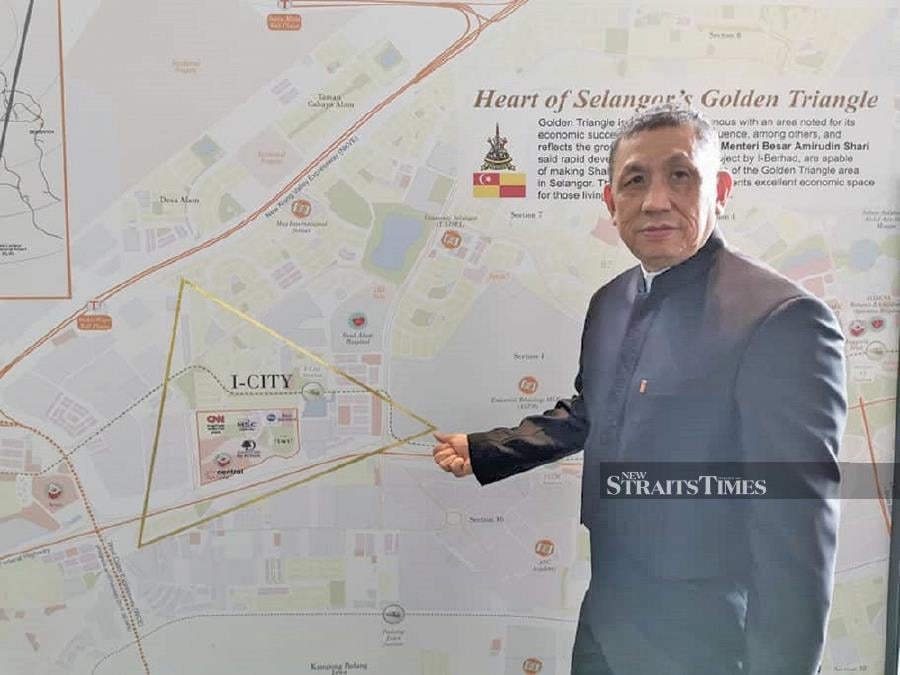 Lim hopes i-City would cement it place as the heart of Selangor’s golden triangle and as a platform to help in the realisation of the Smart Selangor 2025 initiative.

“Considering that only half of the approved GFA (gross floor area) has been completed, there are ample opportunities for i-City to continue contributing to the economic development and prosperity of Selangor,” he said.

As the No. 1 Technology City, I-Berhad has the track record to be a catalyst to help Selangor achieve its vision.

“From the onset of i-City’s conceptualisation and development about 15 years ago, technology has always been the underlying motivation which sparks all manner of activity,” said Lim.

Today, i-City is still the only urban centre in Shah Alam and is home to information and communications technology (ICT)-centric businesses such as the Selangor Digital Creative Centre (an incubator and co-working centre of the state government), and the first Uptime Institute-certified data centre in the country.

“Uptime Institute is known to be the IT industry’s most trusted and adopted global standard for the proper design, build and operation of data centres,” said Lim.

i-City was also the first connected community in the Southeast Asian region when it adopted the Cisco Smart + Connected Community platform, making it the first development in the country that provided not only fibre optic-based connectivity to the unit as a basic utility, but also high speed broadband when dial-up modems were still commonplace.

“i-City we see unfolding before our eyes today was founded on the determination to offer a fully-integrated lifestyle township with the infusion of cutting-edge technologies, characterised by a number of strategic alliances with some of the world’s leading lights.

“When completed, the entire i-City landscape will be an intelligent and international city comprising a shopping mall, corporate office towers, cyber office suites, serviced residences, hotels, apartments, leisure attractions, medical and educational hubs, as well as a data and innovation centre,” he said.

“By such time, a total of 20 towers would already have indelibly and unmistakably marked the skyline of Shah Alam,” he added.