THE Kuala Lumpur luxury condominium market, having taken a hit over the last couple of years due to the pandemic, is expected to remain soft in 2022. Savills Malaysia Sdn Bhd group managing director Datuk Paul Khong says the high-end condominium market is anticipated to stay subdued for at least the first two quarters of...

THE Kuala Lumpur luxury condominium market, having taken a hit over the last couple of years due to the pandemic, is expected to remain soft in 2022.

He says the discontinuation of the Home Ownership Campaign (HOC) and moratorium by the central bank are contributing factors to the subdued luxury condominium market this year.

“Many developers have previously been clearing their unsold stock via the HOC as a priority,” he tells StarBizWeek.

Khong says he expects to see some improvements in 2022 due to pent-up demand from buyers within the high-end residential segment.

“But a full recovery here will take more time and probably be delayed into the first half of 2023.

“The challenges faced by the luxury condominium market in 2021 will carry into this year. This is on top of the fact that there were no fiscal goodies announced at Budget 2022 in October last year.”

“We don’t think there will be any major improvements this year. However, we do believe that the downward movement of prices will stop and flatten out.

Given the subdued environment at the moment, Siva says now would be a good time for buyers to enter the market.

“For sellers, they are just going to have to accept that prices will remain the same for a while.” 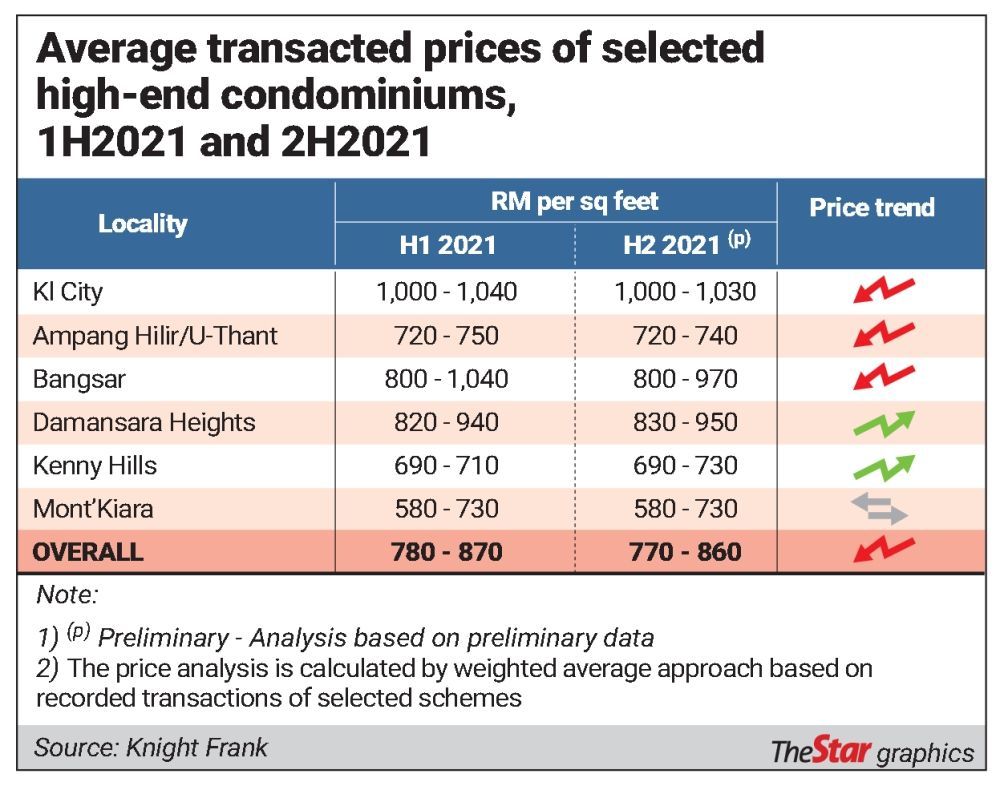 In light of this, Siva says he does not expect “a flurry of activity” within the Kuala Lumpur luxury condominium market this year.

“We expect to only see real meaningful growth perhaps by mid 2023,” he says.

Going into 2022, however, Khong says there are several factors that can help spur the local property market, including the high-end condominium segment.

“The property market drivers to look forward to include a low-interest rate environment, improved market sentiments post-Covid, the reactivation of the Malaysia My Second Home programme and reopening of international borders.

“Developers will have to come up with innovative packages to capture their own niche, target markets, as they push their high-end units into the market despite the discounts to their profit margins.

“Demand is still basically a factor of product and pricing.”

According to Knight Frank in its Real Estate Highlights report for the second half of 2021, the cumulative supply of high-end condominiums stood at 66,128 units in 2021 following the only completion during the review period, namely Ascott Residence (199 units) in Kuala Lumpur.

However, with the country’s transition into Phase 4 of the National Recovery Plan (NRP), Knight Frank says some 6,971 units (16 schemes) are scheduled for completion in the first half of 2022.

“Developers are still holding back on launching new projects. Instead, they may focus on completing under construction projects and/or adopt soft launch/pre-launch strategies to gain some initial market interest before the official launches.

“During the review period, four projects were officially launched, namely Est8 @ Seputeh, Residensi 38 Bangsar, The Cedar and Alfa Bangsar; while two projects, The Atrium and Laurel Residence, were previewed/soft-launched.”

Khong says the Covid 19 pandemic over the past two years had generally slowed down completions of many projects, adding that these delays pushed new supply to enter the market in 2022 or 2023.

“If the Covid-19 lockdowns are repeated, the property market will struggle. We need this pandemic to go away soon for market normalcy to return and for all businesses to recoup their losses.

Siva, meanwhile, says the biggest factor that could potentially derail the property market this year is another surge in Covid-19 cases.

“Right now, the world is grappling with the Omicron variant but consensus is that its effects are milder than previously anticipated.

“However, what happens if in a few months, a more deadly variant emerges? That could have dire consequences on the local property market.”

Knight Frank says the volume of transactions of high-rise residential properties (including serviced apartments) in Kuala Lumpur showed an upward trend in the third quarter of 2021, soaring 25.5% during the period.

It says this was likely due to gradual easing of restrictions and reopening of sales galleries following the Federal Territory’s transition into phase four of the NRP.

“The corresponding value of transactions was, however, lower, This could indicate that there may be higher demand for lower priced and affordable housing units during the period.”

“However, this may also be an opportune time for genuine buyers and investors looking to invest in luxury properties in prime locations such as KLCC and Bukit Bintang, taking advantage of the attractive developers’ sales packages in this buyer’s market as well as the decade-low interest rate environment.”

Additionally, Knight Frank says the abolishment of the Real Property Gains Tax for property disposals in the sixth and subsequent years of ownership (as announced under Budget 2022) augurs well for long-term property owners.

This, it says, is especially for those that wish to dispose of their existing properties for purposes of upgrade, as well as for empty nesters looking to downsize.

“The exemption of the tax penalty is expected to boost activity especially in the secondary market.

“In the short-to mid-term, the residential property market is anticipated to gradually recover although the emergence of new Covid variants continue to pose downside risks.”

Knight Frank says the pandemic has sparked demand for properties away from the hustle and bustle of the city, as evidenced by zero new launches within KL City during the second half of 2021.

“In the fringe areas of the city, the gross selling price of newly launched residential schemes ranges from RM748 per sq ft up to RM1,700 per sq ft.

With the government’s focus currently skewed more towards the primary market in terms of incentives and policies, Knight Frank says the momentum in Kuala Lumpur’s secondary market remained flattish in the second half of 2021.

“During the review period, the overall average transacted price in Kuala Lumpur’s high-end residential sector was relatively stable with a slight dip of circa 0.6%.”

By sub-markets, Knight Frank says the average asking prices for selected schemes within the city, Ampang Hilir/U-Thant and Bangsar areas were marginally lower.

The average asking prices in Damansara Heights and Kenny Hills remained in positive territory, while prices in Mont’ Kiara continued to hold steady.