THE West Coast Expressway (WCE) is a tolled development highway from Banting, Selangor to Taiping, Perak and land along the 233km road can potentially be used for townships. The WCE is also expected to stimulate tourism, industrial and commercial activities in Perak, Penang and Selangor due to the enhanced connectivity provided by the WCE between...

THE West Coast Expressway (WCE) is a tolled development highway from Banting, Selangor to Taiping, Perak and land along the 233km road can potentially be used for townships.

The WCE is also expected to stimulate tourism, industrial and commercial activities in Perak, Penang and Selangor due to the enhanced connectivity provided by the WCE between the Penang Port, Lumut Port, Port Klang and Westport.

Further, once the WCE is completed, it will connect the main coastal towns, including Banting, Klang, Kuala Selangor, Teluk Intan, Setiawan, Manjung and Hutan Melintang, which are now connected via a trunk road.

Area Management Sdn Bhd is among a handful of companies which have bought land where there is direct access to the WCE.

PNB Development Sdn Bhd, a subsidiary of Permodalan Nasional Bhd (PNB), is the master developer of the 809.37ha Kota Seri Langat and is responsible for the master plan and development of major infrastructure.

The landbank was acquired in 1996 from Dusun Durian Plantation Ltd, a subsidiary of Golden Hope Plantations Bhd.

The development of Kota Seri Langat had started with the sale of several parcels of land totalling 176.04ha to other developers between 2001 and 2008.

A visit to the site shows hoardings and billboards are up and land clearing is ongoing, a clear sign that developments may start soon.

A spokesperson from PNB said overall, the township development is expected to finish in 2027, adding that it will include a mix of residential, commercial and industrial properties. “The current plan is to develop 763 acres (308.76ha) of residential, 596 acres (241.19ha) of commercial and 281 acres (113.72ha) of industrial, with balance land devoted to public amenities and infrastructure.” 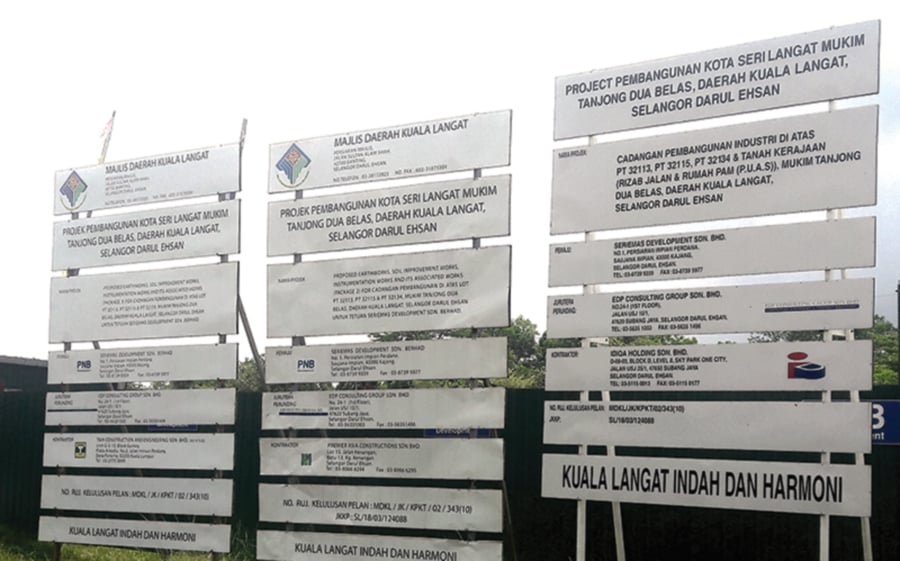 PNB Development Sdn Bhd has put up signboards at its 809.37ha development in Kota Seri Langat.

The spokesperson said several catalytic components have already been developed onsite, namely the Kuala Langat Administrative Centre, the Syariah Courts and a hypermarket.

“We consider it a viable township given that it is strategically located within the vicinity of both seaports and airports with an even greater connectivity upon the completion of the West Coast Expressway,” the spokesperson toll NST Property.

The spokesperson said that PNB will focus on the master development of the township and will either sell to, or jointly develop the land, with established developers.

“As part of PNB’s mandate to deliver sustainable returns to its unitholders, PNB continuously seeks opportunities to optimise its investment portfolio,” the spokesperson said.

There is a huge furniture complex and a pool of electronics-based companies in Olak Lempit, with a few dozen manufacturers and traders.

The RM11 billion Bandar Rimbayu was unveiled in 2013 and IJM Land has launched more than 10 phases so far, including Perennia, Periwinkle, Scarlet, Wisteria, Penduline, Blossom Square and Livia.

Accessibility to the Elite highway and SKVE has been a key selling point for Bandar Rimbayu.

The WCE project with 21 interchanges is expected to enhance accessibility to the west coast region by reducing travel time and associated logistic costs.

The build-operate-transfer project with a concession period of up to a maximum of 60 years is jointly developed by the Public Works Department and toll concessionaire WCE Holdings Bhd’s West Coast Expressway Sdn Bhd.

Construction started in August 2014 and is expected to be completed by August 2021, excluding a 10km stretch known as Section 7b that is set to complete by December 2022.

To date, the overall completion of the construction is 63 per cent and work is still ongoing.

On May 31 this year, Section 8 of Hutan Melintang to Teluk Intan opened for traffic following the completion of construction work.