ONCE an estate, Bukit Jalil has turned into one of the most sought-after neighbourhoods thanks to catalytic developments, such as the National Sports Complex (NSC) and the 18-hole Bukit Jalil Golf & Country Resort. A suburb of Kuala Lumpur, development activities in the area started in 1992. The NSC, the largest sporting venue in Malaysia,...

ONCE an estate, Bukit Jalil has turned into one of the most sought-after neighbourhoods thanks to catalytic developments, such as the National Sports Complex (NSC) and the 18-hole Bukit Jalil Golf & Country Resort.

A suburb of Kuala Lumpur, development activities in the area started in 1992.

The NSC, the largest sporting venue in Malaysia, was built by United Engineers Malaysia Bhd (UEM) for the 16th Commonwealth Games, which was hosted by Malaysia in 1998.

The high-density project, also known as Athletes Village, once ended up as a ghost town when the Commonwealth Games was over.

The situation, however, changed when developers like Berjaya Land Bhd (BLand) and Bukit Jalil City Sdn Bhd came in and slowly started buying up land in the area.

The first development by BLand was Bukit Jalil Golf & Country Resort, and this prompted many more players to venture in Bukit Jalil as they anticipated demand for houses to increase.

The entry of higher education institutions, such as the International Medical University (IMU) and Asia Pacific University of Technology and Innovation (APU), helped boost demand for properties in the area.

It also gained from major improvement in the infrastructure. Members of the public using the outdoor space at the National Sports Complex in Bukit Jalil. -NSTP/Aizuddin Saad

Bukit Jalil today is linked to other parts of the Klang Valley via the Damansara-Puchong Expressway and the Puchong-Sungai Besi Highway. It is also accessible via the Shah Alam Expressway, Maju Expressway, and the New Pantai Expressway.

When the Commonwealth Games ended in 1998, there was another hiccup. The conditions of the stadiums in the NSC started to become an eyesore.

In 2015, Malaysian Resources Corp Bhd (MRCB) was awarded a RM1.6 billion contract to rejuvenate the NSC in two phases, and transform it into a new sports city that could rival Singapore’s iconic Sports Hub.

With the NSC rejuvenation, there has been more interest in Bukit Jalil from house buyers, investors, retailers, multinational companies and businesses in general.

Exsim Group, which developed its first project in the suburb in 2009, said developers could easily sell apartments at gross selling price from RM800,000. 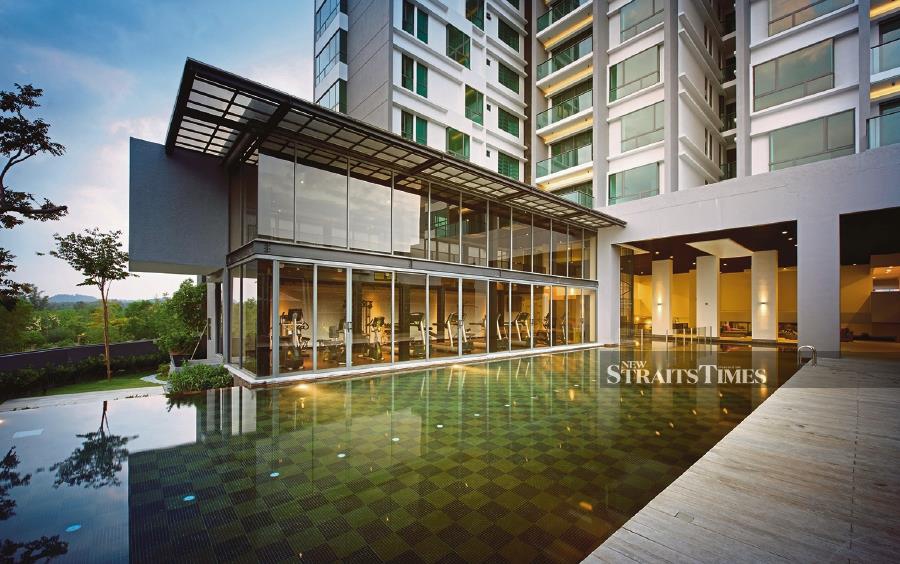 “There is steady growth in Bukit Jalil. The area has existed for a long time, but people had not really paid much attention to it. But in the last 10 years, people started looking at Bukit Jalil. Based on feedback we have received, people want to live in Bukit Jalil to be close to the golf course, the 80-acre (32.37ha) green lung that is already here and the new Pavillion Bukit Jalil Mall that is coming up.

“Apart from IMU and APU, there is SJK (C) Lai Meng, the NSC and LRT station. The way I see it, Bukit Jalil is a city on its own. It has everything from primary, secondary and tertiary education, medical centres, shopping mall, retail, office towers, landed properties, apartments, a golf course and recreational park,” said Michelle Siew, head of marketing and corporate communications of Exsim Development Sdn Bhd.

Exsim has launched 21 projects with total gross development value of about RM8 billion since 2008. It has completed 14 of those projects and seven are ongoing. Exsim Group launched The Treez @ Bukit Jalil in 2009 at RM400 per square feet and the price has doubled since then.

The company started with Nouvelle Industrial Park, an industrial development in Kota Damansara.

Exsim launched its flagship residential project in Bukit Jalil, The Treez, in 2009.

“We launched The Treez at RM400 per sq ft (psf). Today, in the secondary market The Treez is selling at RM800 psf. We entered the right time in 2009. It was a booming period back then,” said Siew.

In 2017, Exsim launched The Leafz at RM400 psf. In the secondary market, it is currently selling at about RM700 psf,” she added.