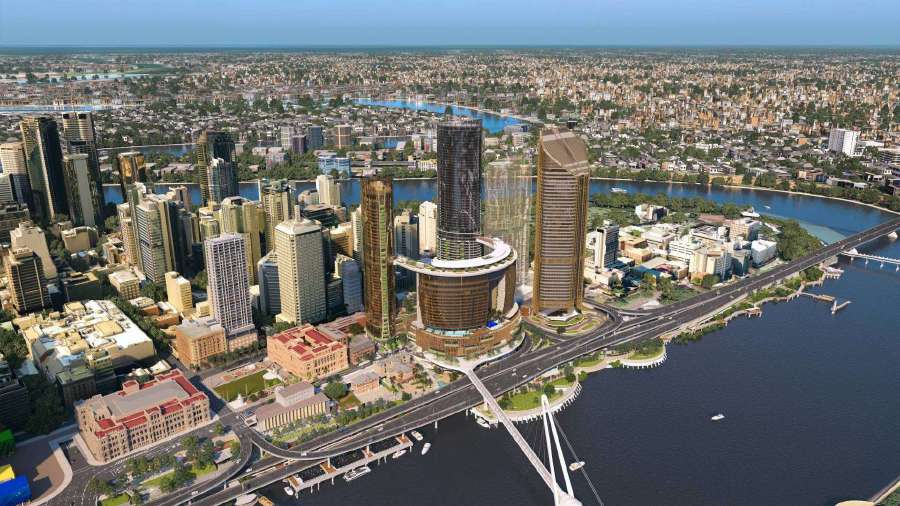 It will also see the set-up of four hotels – The Ritz-Carlton, The Dorsett Hotel, The Star Grand, The Rosewood.

Queen’s Wharf Tower, the second residential building in the development, spanning 71 floors and 250 metres above the new casino, is one of the key assets.

The Queen’s Wharf Tower is scheduled to be completed in 2026.

According to Darien Bradshaw, executive director of One Global Australia, the first residential tower, Queen’s Wharf Residences, is now sold out.

“This is a world-class project developed by Chow Tai Fook and the Far East tat will really put Brisbane on the map,” he said in a statement.

According to Bradshaw, Queen’s Wharf Brisbane has similar aspects in its concept to Marina Bay Sands in Singapore, with the added benefit of the residences.

“Barangaroo in Sydney is also very similar and has seen prices there double for apartments with a view. We expect a high take-up of the residences in the first few weeks,” he said.

According to Bradshaw, Australia is seeing increased interest from expatriate and foreign investors in Brisbane, Sydney, and Melbourne, with high demand expected in the coming quarter as travel improves and migration and students return.

Offshore expatriates have been very active, driven by Covid-19 and unhappy families seeking a lifestyle change, as measures in Australia are much more relaxed compared to major Asian cities such as Singapore and Hong Kong, he said.

“We are currently seeing families looking at major capital cities, as well as sought-after locations along the coasts. Expatriate buyers are looking for three main conditions when purchasing a new home in Australia that is near to family, lifestyle, and education. Budgets for expatriate buyers are ranging from the A$3 million to A$15 million,” he said.

According to Bradshaw, expatriates are looking for houses/apartments in capital cities, coastal properties, lifestyle retreats, and/or holiday homes.

“People with primary residences in regional centres who need to work in the city are buying pied-à-terre’s in a similar fashion to individuals in the UK and US. These are often in brand new boutique projects that may or may not have waterfront views in capital cities or in a second-hand market in affluent suburbs close to the city,” he said.

An artist’s impression of the Queen’s Wharf Brisbane integrated casino and resort complex in Australia.

Foreign student rentals are a leading indicator of investment demand, and vacancies have now fallen below 0.5 per cent in Brisbane, he said.

“Flights are full with returning Asian students and all major capital cities are enjoying a surge in demand. VTL flights from Singapore are available and we are seeing that for the first time investor demand is increasing significantly,” he said.

Bradshaw said with borders reopening between Singapore and Australia, foreign students returning, the government’s new policy to reach 200,000 new immigrants per annum, low-interest rates, a strong SGD versus AUD, Australia has always firmly been close to the top of the list of places for Asian investors to purchase the property.

The higher stamp duty rates in Singapore are also attracting investors to Australia, he said.

“If you are a Singaporean and you already own one private property in Singapore, a S$1million property will attract a stamp duty of circa S$195,000. (And S$275,000 if you own two or more). In Australia, there is a blanket foreign buyer stamp duty of seven or eight per cent and then standard local stamp duty rates. Regardless of which state you purchase in, the range of total stamp duty a Singaporean will pay is circa A$37,500 to A$135,000. So the savings are significant! And they don’t increase with the number of properties you purchase,” noted Bradshaw.

In addition, he believes that investor confidence in Australia should be boosted by recent headlines that more than A$20 billion of funds have been invested into the country from Singapore in the last two years.

Many major household brand developers, real estate funds, and GIC have contributed across all sectors of real estate, including residential.

“Although local owner-occupiers have dominated the residential market in Australia, the launch of new projects with the easing of Covid measures will see a return of investors who enjoy buying off-plan. Pre-Christmas launches in Australia saw high demand in all major capital cities. Traditionally overseas buyers make up 5 to 15 per cent of buyers in new launch projects, but it can vary greatly depending on the city,” he said.

One Global Group founder and chief executive officer James Puddle said that as every country around the world battles with varying degrees of Covid restrictions throughout the start of 2022, property markets have proved to be resilient.

“This has provided excellent conditions for investors looking at strong capital appreciation as well as increasing demand from renters. There has also been significant demand from individuals relocating or moving back to their home countries,” he said.

Puddle said during the first two months of 2022 the group has seen an increase in buyer demand across its Hong Kong and Singapore offices.