Potential buyers behind a scale model of Country Garden Holdings’ Forest City project in the Malaysian state of Johor, on 25 March 2018. Photo: EPA-EFE Country Garden Holdings, the largest foreign real estate developer in Malaysia, has trimmed the size of its workforce and sales team in the country by two-thirds over the past two...

Potential buyers behind a scale model of Country Garden Holdings’ Forest City project in the Malaysian state of Johor, on 25 March 2018. Photo: EPA-EFE

Country Garden Holdings, the largest foreign real estate developer in Malaysia, has trimmed the size of its workforce and sales team in the country by two-thirds over the past two years, as sales of its US$100 billion Forest City township near the Malaysian border with Singapore has slowed to a trickle.

The developer, based in the Guangdong provincial city of Foshan, has cut its Malaysia staff to 500 as of June following three rounds of retrenchments over the last 18 months, from 1,700 in 2019, according to several people familiar with the matter.

Another round of reassignments – where offshore employees are recalled back to China to find open vacancies at home – is likely to kick off soon, according to the people who declined to be identified. Staff who fail to settle into new jobs will have to leave the company, they said. Country Garden’s spokespeople in Hong Kong did not immediately respond to queries by South China Morning Post.

The lay-offs are the consequence of a triple whammy of hits on Country Garden’s proposition to sell offshore landed property to China’s growing middle class, since the company reclaimed its first square kilometre of land from the Strait of Johor that separates southern Malaysia with Singapore in 2013. 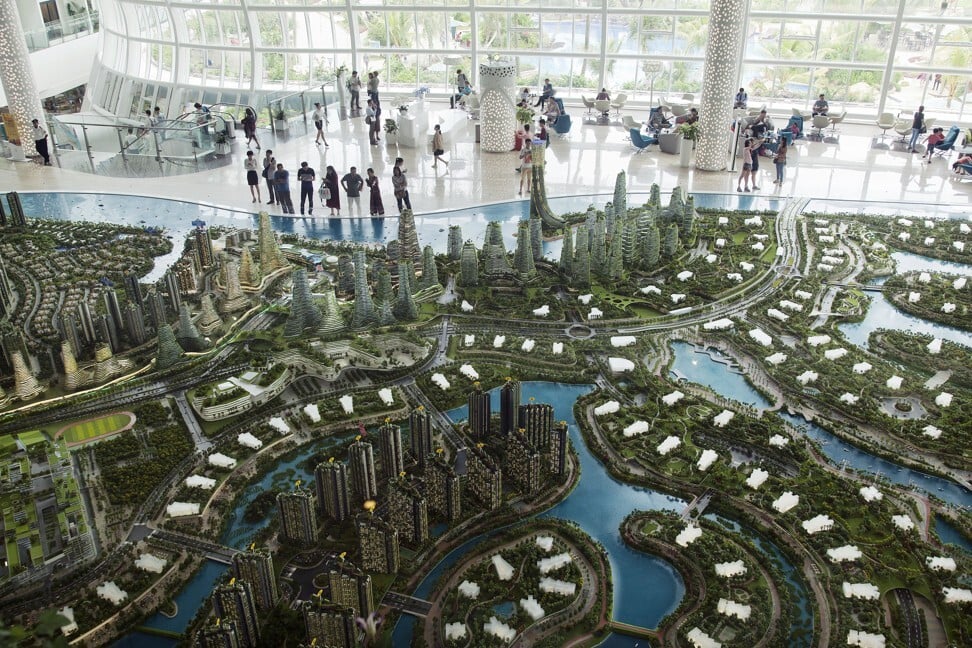 A model of the Forest City development at Country Garden Holdings’ showroom in Iskandar Malaysia,
on November 2, 2016. Photo: Bloomberg
The first hit on the project was in 2017 when China’s government brought down the boom on offshore remittances of funds by Chinese citizens to deter capital flight. The second was a deterioration in relations between China and Malaysia, sparked by comments made by former premier Mahathir Mohamad who soil only “to be sold to foreigners”. The coronavirus pandemic of 2020 and the subsequent lockdowns and travel bans rang the death knell on the project, reducing the developer’s sales of bungalows and strata property at Forest City to fewer than 10 over the past 18 months, according to sales people who declined to be identified. 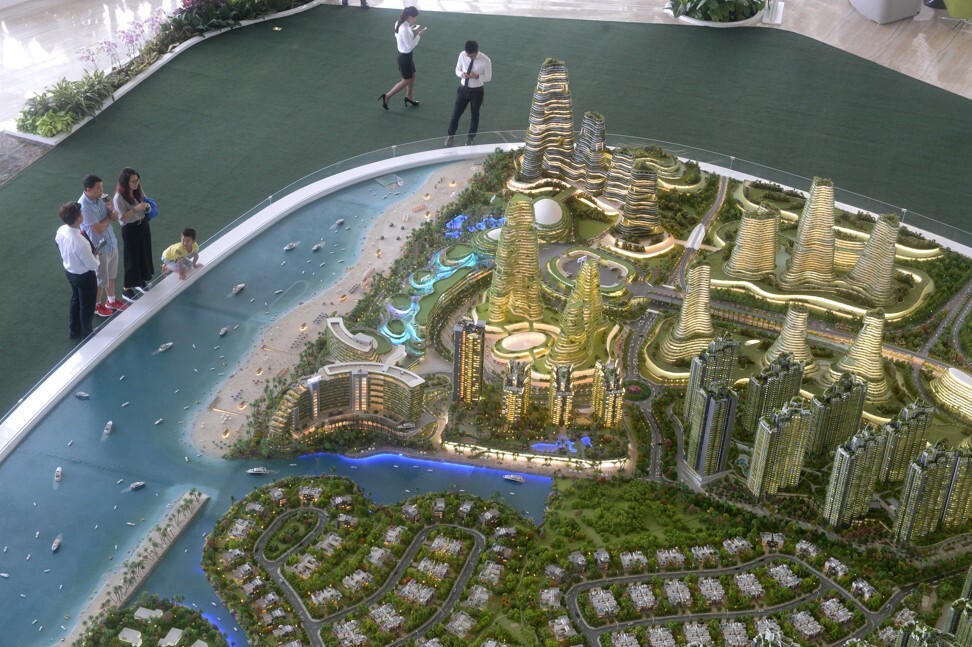 A model of the Forest City development. Photo: AFP.

The project, located on four reclaimed islands a short drive from Singapore, is envisioned to eventually accommodate 700,000 residents in an area measuring 30 square kilometres (11.6 square miles) or eight times the size of New York’s Central Park when it is completed by 2035.
The project, established in the same year that Chinese President Xi Jinping kicked off the Belt and Road Initiative (BRI), is meant to be Country Garden’s biggest overseas project. The company projected 18 billion yuan (US$2.8 billion) in annual sales, or 11 per cent of Country Garden’s total revenue in 2016, pledging to invest US$100 billion over two decades into Forest City.
Country Garden owns 60 per cent of the project, while the government of Johor state in southern Malaysia owns the balance.
China’s growing middle class was Country Garden’s target, making up 90 per cent of Forest City’s unit sales. It wasn’t long before China’s currency regulators, anxious to prevent capital flight, brought the boom down on overseas remittances. Country Garden had to close all its sales centres in China that were set up to promote the Malaysia project in early 2017 when the crackdown came.
In August last year, Malaysia’s government called a halt on a visa incentive programme called “Malaysia: My Second Home (MM2H)” that was originally designed to offer 10-year visas to entice property buyers to Malaysia’s equatorial lifestyle.
“The original purpose was to get my son an international passport to enrol him into a better university in China, or for studying overseas,” said Ivan Luo, who paid 700,000 yuan in 2016 for a condominium unit measuring 47 square metres (506 square feet) at Forest City. “[The plan] would not be fulfilled anyway, so I have willed myself not to think about the money I lost.”
Eight years since the project started, one of four of the artificial islands on the plan has been completed featuring condominiums, the five-star Forest City Marina Hotel, an international school, a plant for industrialised building systems (IBS) and a commercial area.
Owners of 10,953 homes at Forest City received their keys at the end of July, according to the developer. Country Garden doesn’t talk about Forest City much these days. The company’s 2020 annual report made no mention of what was once dubbed its “prime example for future cities”, compared with one highlight in 2019 and 29 references in 2015.