IN 1965, See Hoy Chan Group, founded by the late Datuk Teo Hang Sam, launched its flagship housing project in Klang, called Berkeley Garden. Berkeley Garden was successful but it was the only project that See Hoy Chan developed in Klang as the group was focusing on developments in Petaling Jaya. See Hoy Chan is...

For the Teo family, Berkeley Uptown is basically their second development in Klang. The first series in Phase One is set for launch at the end of this month.

THE STORY BEHIND IT

Paramount submitted its bid and won.

“We bought the two parcels of land because we saw the opportunity. This is the last big parcel of land that is available in Klang. We believe it is time for the ‘old’ Klang to have some new modern, lifestyle accommodation.

“We are building a modern, integrated vertical city, and we think it will make Klang more vibrant with its residential and commercial offerings,” said Paramount Property chief executive officer Beh Chun Chong.

Berkeley Uptown comprises a residential precinct, a commercial precinct, a 2.12ha education precinct and a 0.81ha public park. All the components will be connected with a pedestrian link.

The school, which will open in 2021, is one of the main highlights of Berkeley Garden, Beh told NST Property.

“Bringing Sri KDU into Klang just shows the confidence we have in the market,” he said.

Paramount Corp is the owner of the KDU Education Group which, since the 1980s, has been offering undergraduate courses.

PUTTING FACTORY PIECES TO GOOD USE

After Paramount acquired the Fung Keong shoe factory, it discovered that the plant had been constructed using large quantities of chengal and balau and other Malaysian hardwood like, merbau and kempas.

Recognising the value of the wood and its scarcity today, Paramount decided that it should be put to good use.

To determine its age, a piece of the chengal wood was sent to an expert on Malaysian forestry from Universiti Putra Malaysia, who sent it for testing at a laboratory in the United States.

What ensued was a surprising revelation ― the age of the wood was about 200 years old, making it one of the oldest chengal wood finds in Malaysia today.

Paramount put the reclaimed wood from the old factory to good use, and you can see the result at the Berkeley Uptown sales gallery.

The successful combination of old and new showcases the rustic beauty of the timber while ensuring solid soaring pillars and high ceilings. With reclaimed chengal as a unifying element, the result embraces the environment with an ecologically sustainable design.

“Paramount is glad that it is able to do its part for the environment and, at the same time, create a legacy in the form of an iconic lifestyle structure that can be enjoyed for many years to come,” said Beh. Rustic beauty at the Berkeley Uptown sales gallery in Klang.

BERKELEY Uptown will feature a minimum of 10 towers, most of them residential, and they will be developed in several phases by 2028, said Paramount Property Development Sdn Bhd chief executive officer Beh Chun Chong.

“The big part of Berkeley Garden will be residential. We are looking to build around 4,000 apartments and low-rise villas, depending on approval,” he said.

The first launch series in Phase 1, which is targeted at the end of this month, will see 241 serviced apartment units entering the market at an average price of RM470 per sq ft (psf), and 14 villas.

Beh said the rest of the units in Phase 1 would be launched gradually this year.

Paramount is confident that Phase 1 will be fully sold out within the next few months.

“We are building a modern and vibrant live-work-and-play community. By building a vertical city, we are reducing carbon footprint and providing a more sustainable environment.”

Beh said Phase 1 would be completed by end-2022 and most residents would be able to move in by early 2023.

Paramount has also submitted its plan for Phase 2 of the project and hopes to build between 1,500 and 2,000 units.

“It is up to us to control the density. We have quite a lot of enquiries for Berkeley Uptown, especially from Klang folks. There are quite a number of people who are looking to upgrade and live in bigger apartments like our 1,093-sq-ft units and the villas. There are also young and elderly couples who want to downgrade from their current landed family home to a small apartment, so its easier to manage.

The Berkeley Uptown sales gallery with show units was developed on a 1.62ha site and opened in March.

The sales gallery has classic setting built with chengal wood, a popular and durable hardwood that gives a pleasant feeling when you walk in.

“You will find chengal wood just about everywhere. When we took over the shoe factory, we decided to make use of the wood by adding them as structures for the sales gallery,” he said.

According to Beh, the sales gallery will remain on its present site until the project is almost at its tail end of completion.

“The sales gallery is a temporary structure. Our plan is to transform it into a lifestyle village, basically an area with food and beverage outlets as well as retail, catering for the residents. The public can also come to enjoy the outlets.”

He revealed that Japanese convenience store FamilyMart would be opening soon at the sales gallery.

There will also be a space dedicated for arts and cultural activities surrounding the premises.

“We may build up the sales gallery, or what we call the village, to include two levels. If there is demand and it becomes very popular, then we will maintain the structure permanently. It will be like a clubhouse but without a swimming pool. Students from KDU International can patronise it,” said Beh. 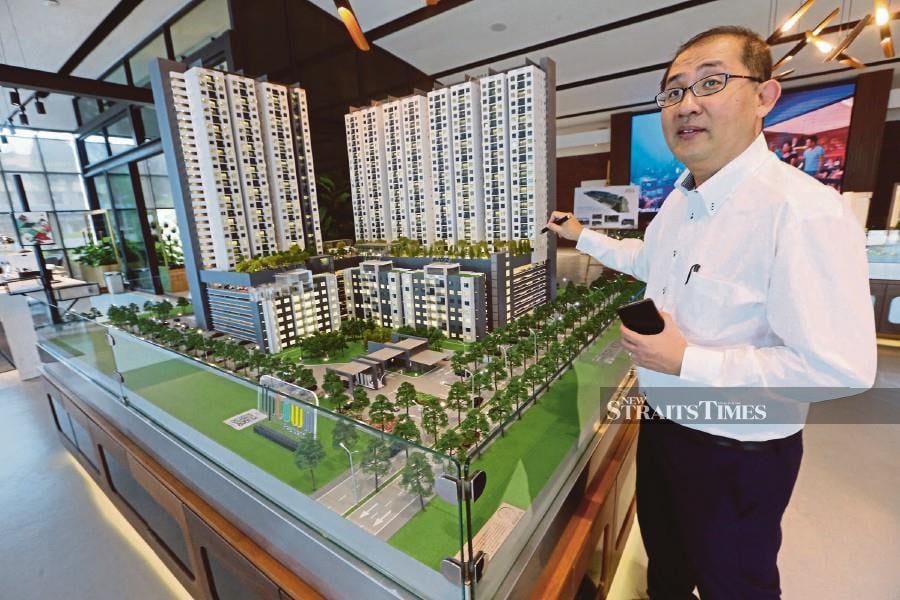 If Paramount gets an opportunity to acquire more land nearby, the company would consider expanding Berkeley Uptown or replicate the development in Klang, said Beh.

“This is a good area. There is not much development along Jalan Goh Hock Huat and we are located right smack in the Klang town. Its close geographical proximity to Klang’s main business hub makes it a convenient and ideal place for everyday living.

“We are not sure if anyone is selling as we haven’t been looking, but if there is a good opportunity, we will look at it.”

There are a few factories and more than 100 businesses like restaurants, cafes, car showrooms and workshops operating along Jalan Goh Hock Huat.

“Berkeley Uptown is also about 3km from the existing Klang KTM station, and 0.9km away from the new Light Rapid Transit (LRT) Line 3 station in Klang, allowing convenient access to Kuala Lumpur city centre. When LRT 3 is completed, it will add to the accessibility and make it convenient for those preferring to use the public transport,” added Beh.